Golden monkeys are some of the primates found in Rwanda and can be tracked in the bamboo forest sharing border with Volcano National Park only where Gorilla tracking takes place.

On top of the endangered Mountain Gorillas, Golden monkeys are other primates to be trekked in Volcanoes national park of Rwanda. Currently Volcanoes has two habituated golden monkeys’ troops with 80 members, One Troop comprises around 80 – 100 members and has its home at the foot of Mt Sabyinyo in Volcanoes Park.

Golden Monkeys are rare species in the World and thus endangered. The Golden Monkey (Cercopithecus Mitis Kandti) is a local subspecies of the widespread Sykes Monkey, also known as the “Blue Monkey” and is endemic to the high altitude forests of the Volcanoes Park area.

These primates are very active creatures which jump from tree to tree making it difficult to photograph.

This primate tracking is worth going for while in Volcanoes Park and if you’re interested in wildlife, this is a rare and delightful experience not to be missed. 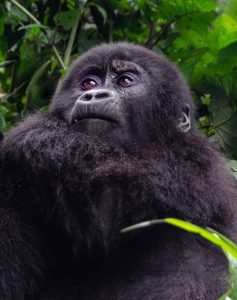 Hotels to consider sleeping in Kinigi near Rwanda Volcanoes Park