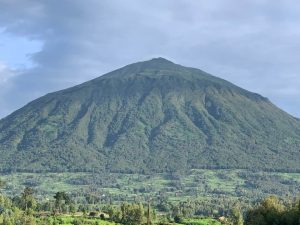 To Hike Mountain Karisimbi the hardest Volcano to trek. Karisimbi is situated in a thousand hills among the eight Volcanoes found in the Virunga ranges of Rwanda thus requires fitness of the climber.

It’s name is derived from the word “amasimbi which means snow since it can quoted by snow on its top during the dry season of June, July and August. The famous Karisoke research Center which was founded by Dian Fossey is located between Karisoke and Bisoke volcanic mountains. This research Center was built mainly to care and protect the mountain gorillas found in Volcanoes National park. 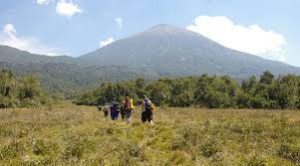 Mt. Karisimbi Volcano Rwanda is named after a local name AMASIMBI that refers to snow that is sighted on top during the dry months of the year including January, February, June, July , August, September, October and December.

It produces lava flow of 12kms long covering 23km on the Easter side of the volcano.

Mt. Karisimbi has got a pit crater on the southern side of the summit cone and it is covered by blocks and has a flat crater, the summit cone which is steeper than the volcano with slopes of a 25 to 30 degrees and has a regular shape of a strato volcano, the lava plain of this volcano also covers an area of 400 km and does not contain water courses since most of the lava is erupted from the pit crater and caldera.

The Karisimbi Hike starts as early as 8: am with briefing at the Kinigi volcanoes national park headquarters. After briefing, drive to the hiking head trail where you begin your hike to the white-capped summit.Mt. Karisimbi, the fifth highest snow-capped mountain of Africa. You will have dinner and overnight, half way Mt Karisimbi. During the trek, some lucky hikers may encounter the Karisimbi Gorilla family.

Morning after breakfast, you will ascend to the summit then climb down. Our safari guide will be waiting for you at the foot of the mount.

The Hike to Karisimbi Volcanoe includes;

– Transportation with a 4 x 4 wheel drive 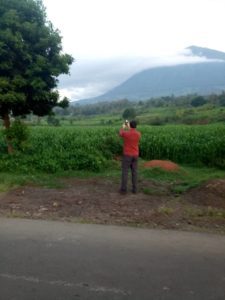 What to carry for the Mt. Karisimbi Volcano trek

Along the hiking trail, you might encounter the Gorillas if you are lucky.

For more details about how to Book Mt. Karisimbi Volcano Hike and Karisimbi Gorillas Trekking , email us at  Katona Tours and Travel